I received an email this morning from a workshop client who had just sold an image to a national magazine. The image was taken using an iphone instead of a DSLR and in the words of my client  “I might not have all the fancy gear and can only manage to snap with my phone, but you have taught me so much about composing the photo and it has paid off”

I love receiving emails like this. It is fantastic to know that a few compositional techniques have elevated someones photography to the point where they feel happy with the images they are producing. And the fact that a national magazine is willing to offer money for one of those shots is the icing on the cake.

Landscape photography is all about making a successful image from the scene in front of you. Even if your view is dominated by amazing scenery it doesn’t follow that you will produce a stunning image without giving some serious thought to your composition. Similarly mundane scenery doesn’t mean you will come away with a dull image. It is all about your interpretation of what is in front of you and how you translate that into an image.

When we stand in front of a landscape we see it in 3 dimensions, but when the camera sees the landscape it only sees it in two – the third dimension, depth, is missing. It is our job as photographers to introduce this element into our images by creative use of composition.

When confronted with an amazing view the temptation is often to point the camera and shoot what we see without looking around for any additional elements. This is often why our images fail because there is no depth created in our composition.

When faced with finding a composition it is a good idea to ask yourself some questions….

What is my subject?
This can be anything that catches your eye, a building, geological feature, a tree or an area of light or a pattern or a block of colour.

What am I going to use as my foreground?
Your foreground is there to compliment your scene and draw the viewers eye into the image. It doesn’t need to be a physical structure, it could be areas of pattern or texture or lines created by the movement of water.

What are my supporting elements?
These can be elements within the scene that guide the viewers eye across the entire image.

What am I going to leave out?
Identify unwanted and distracting elements and eliminate them from the frame.

So how do we add depth to our images?
When constructing your images think about your foreground, the middle distance and the background. Decide which will have the most attention in your frame. This will determine your viewpoint.

By placing elements in the foreground, middle distance and background you create a natural progression through your image and hence a sense of depth. 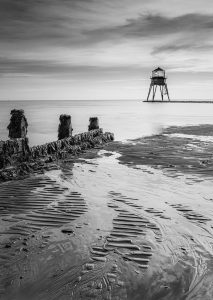 Lines form the edges of shapes, but they also form shapes of their own. Lines can lead the eye in a photograph and serve as a powerful compositional tool. They lead the eye towards a particular part of the frame. A leading diagonal line that heads into the distance will give a photograph a sense of depth. In this image on the right a diagonal line formed by the groynes on the left points to the lighthouse. This gives the eye a route through the image, a connection to the subject and a sense of depth to the image. But this diagonal line is also joined by other lines coming in from the front right of the image. These are made by the patterns in the sand and the channels of water and lead the eye to the diagonal on the left.

As in the first image lines don’t need to be actual objects. They can be areas of texture or shadow. As long as they form a route through the image they are important for creating depth. 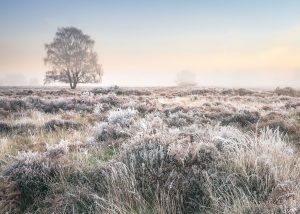 This image on the left uses areas of shadow (darker zones) and highlights (light zones) to form implied lines through the image, which in this case all lead to the tree on the horizon.

Line are just one way of creating depth in an image. They are also only one compositional tool. If you would like to find out more about composition then I will be running a series of half day compositional workshops over the summer. The first one will be held in Aldeburgh.